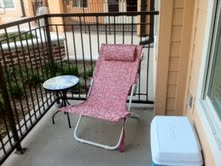 Every now and then my ego/id gets the best of me. When this happens my husband Tommy usually receives the brunt of my aggravation. Sometimes I just want to leave my apartment by myself. Don’t get me wrong I really love my husband but occasionally I just want to be alone! In order to safely accomplish this, I sit outside on our balcony and practice my Spanish or talk on the phone. I guess the common jargon is “me time.”

Well this particular day simply sitting on our balcony wasn’t enough. I wanted to go closer to the pool. When I told Tommy I was going outside to the deck area, instead of him simply saying okay he asked me, “Why?”

Can I do anything on my own? Am I not a grown 36-year-old woman? But instead of telling him that, I just responded with a snide, “Because that is what I want to do!” I got up, grabbed my purse, phone and walker then closed the door. I tried to slam it, but the door was too heavy! It’s very hard to make a dramatic exit when you’re using a walker. I think he even had to come behind me and shut the door all the way.

I was outside only a minute before I accidentally released the walker and it rolled about six steps away from me. This normally would not be a big deal, but I honestly can’t walk too well or stand for very long without the walker or some other form of support. I managed to take a seat on the cement fairly quickly. The real problem was, “How was I going to get to the walker?” No one else was out there. No one could see me. So, I decided to go for it! I was going to walk to my walker!

Well, it didn’t quite go that way. I was too afraid to try. Besides, this is cement we’re talking about here. Instead, I hesitantly called Tommy on my cell phone to come out to the balcony, so he could at least see me. Okay, here we go again.

I took one wobbly step, another to stable myself but lost my balance and I fell straight to the cement. I’m a seasoned faller, so I know how to safeguard myself. Not even my glasses were broken. Just my ego!

I guess I got the brunt of this one!