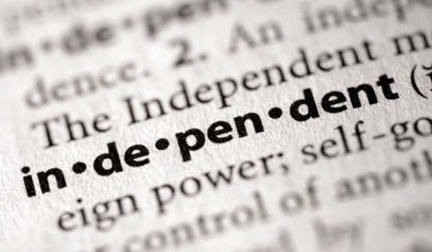 “Success is dependent on effort.” ~ Sophocles

One of the worst things about the state of my health is the dependency on my husband for … EVERYTHING! OK, that might be a bit melodramatic. It just feels like everything.

I’m constantly yelling his name. “TOMMY!” It aggravates me to need something and not be able to get it for myself. It’s an especially annoying dependency because most times what I want may be as simple as my purse, opening the blinds, or locating my shoes.

In one instance, I asked him to go into our bedroom, look in my jewelry box and bring me my choker. Even after giving him a tutorial on what a choker is, it still took him a while to find it. Four minutes later, he finally returned. He handed me the choker and promptly left the room before I could ask him to place it around my neck. So I tried to put it on myself. But my fingers fail to open it. Darn it!

Meanwhile, I know he has every right to be busy doing something for his own enjoyment, although chances are that he is preparing dinner or washing clothes. This only serves to heighten my frustration. He is such a good caregiver/husband and I can only bark so loud. How can I be so selfish? How can I be so dependent?

I like to blame everything on MS. But I realize I hold the responsibility for how I respond to these maddening situations. I think I have become too reliant on other people to do task for me. I admit, I can probably do some of those things for myself or should at least try and attempt to do it.

So this time, I took a brief respite. I simply sat a little while longer than I had initially planned. I gathered myself and decided not to yell for my husband. I’m sure my shrieking voice tends to aggravate him as well.

After four attempts at opening the hook and a few curse words, I finally put the necklace on. In one motion I was able to awkwardly place it around my neck and clasp it closed. I then took a big inhale, a bigger exhale, and relished in my small independent accomplishment.

I think my lack of trying has to do with my fear of failing. I constantly stumble and fall, not only over my own feet but also over all the reasons why I can’t put forward an effort any more. I fear seeing up close and personal what MS has taken from me. So instead of facing that fear, I simply yell, “TOMMY!”

But guess what? Not today. Today I confronted my fear and I won. And I feel great about that. But a part of me is still sad because I just never imagined myself being this dependent on anybody.