“All the world is full of suffering. It is also full of overcoming.” – Helen Keller

(2002)
My eyes were open but I couldn’t see anything. I knew it was morning but it was pitch-dark. I could hear birds chirping outside and my neighbors starting their cars and heading to work.

From my bed I reached for my glasses I keep on my nightstand. I slid them into their familiar spot on my face but they proved to be no help. I rubbed my eyes under my glasses to clear the darkness, but nothing. I could hear Tommy sleeping next to me. I could sense myself blinking. I could feel my eyes moving. I put my hands in front of my face and focused on seeing them but I saw nothing.

As I lay on my back, face toward the ceiling, I began to cry. Surprisingly it was not a hysterical cry, but a soft poignant cry. It was like a cry over a lost love. In my case the lost love was the old Nicole. While the tears slowly slid down my cheeks I knew this was it. My time had come. I had cheated MS since the day I was diagnosed. No real symptoms for a good 2 years. But now it had finally caught up to me. I began to feel like it was my fault. I lived my life like I didn’t have MS. A part of me had begun to think that having MS wasn’t so bad.

I moved to Las Vegas knowing flare-ups of symptoms can be caused by exposure to temperature changes. I worked 12-hour shifts as an RN and slept 5 to 6 hours a night. All the while I was having symptoms. I would stagger here and stumble there. I would forget how to get to work. At times, an electrical sensation would run down my back when I bent my neck. I had difficulties with coordination and balance and rationalized it as being clumsy. I just lived my life like none of that was happening.

Why didn’t I see a doctor regularly? I couldn’t even remember my Las Vegas neurologist’s name. It was like I was giving MS the middle finger. I was laughing at my symptoms.

Well, who’s laughing now? I now know how real and serious MS can be.

The worst thing is that I ignored my vision problems. My sight was steadily getting darker but I never said anything. Hell, I have always had bad eyesight. I was born with glasses on. I was the baby with glasses. How was I supposed to know it was MS and not my normal bad eyesight? Now I guess I don’t have a say in the matter.

I could feel the dried tears on my face. My morning alarm began to ring. I usually quickly turn it off because Tommy works nights and sleeps during the day but I let it buzz. It was one of those alarms that starts off low then gradually gets louder until it’s so loud your neighbors can here it. It got about half way up to its maximum level before I could feel Tommy sit up in the bed. “Nicole what’s up with that? Turn that off”, he said loudly.

Because I was trying to wake him with the buzzing I already had my hand on the off button and was able to promptly stop the alarm. I felt him drop back into a laying position. I softly said, “I have to tell you something.” I could hear a muffled, “What’s up?”

I said in an even softer voice, “I can’t see”. He didn’t say anything for what seemed like forever.

Then he said, “Put your glasses on.”

I don’t know why I was scared to tell him but I was. I waited about 20 seconds. Took a hard swallow and told him, “I do have my glasses on. I still can’t see.”

I could feel him turn in the bed and move quickly towards me. The room was silent. I jumped as his hand touched my cheek. He began to rub my face and said, “It’s going to be ok”. 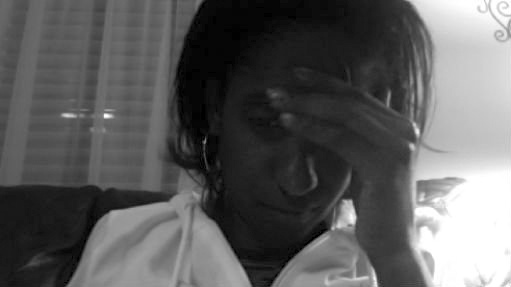 During my aforementioned exacerbation I was completely blind for about 4 hours. We called our doctor but he could not see us for two days. He asked me a series of questions then told me if I experienced any pain to go to the emergency room. Tommy wanted to go straight to the hospital but I talked him out of it. The truth was, since I worked at various hospitals as a nurse I was afraid of my colleagues finding out that I had MS. At the time, keeping my diagnosis a secret was very important to me.

Later that day, my sight gradually started coming back. First in my right eye then the next day my left followed. When I say I regained my eyesight I mean instead of seeing darkness my vision was cloudy. It was like looking through a dirty glass of water. My right eye eventually recaptured its pre-blindness baseline but my left never returned to normal and seemed to have sustained permanent damage from the exacerbation.

For the first couple of days of my “blindness”, Tommy had to bathe and dress me. He helped me comb my hair and brush my teeth. Every time he did something for me I cried. I didn’t know how it affected him because I couldn’t clearly see his face but I think I may have heard him crying the first time he had to help me put my shoes on.

We both took three days off from work while we tried to figure out what to do next.

When we finally saw my Las Vegas doctor he told me that the blindness was due to a multiple sclerosis relapse which could have been brought on by the 100 degree plus temperatures that we experienced daily in Las Vegas. He told me to stay out of the heat and direct sunlight.

I thought to myself, “That’s it! That’s all you got! Gee, thanks doc!”

After the doctor appointment, when we got back to our apartment, I told Tommy I wanted to leave.

“You mean the state?” he asked.

You should have seen the look on his face. His expression showed his disappointment but of course he told me ok. I was asking him to quit a job that he loved and where he had got a raise and promotion after being there only 4 months. At the time, I didn’t realize that this would not be the last time I ask him to quit a job.

Two months later we were back in New Orleans.

I think I may be seeing a pattern.