A Vacation To Remember (Part 1) 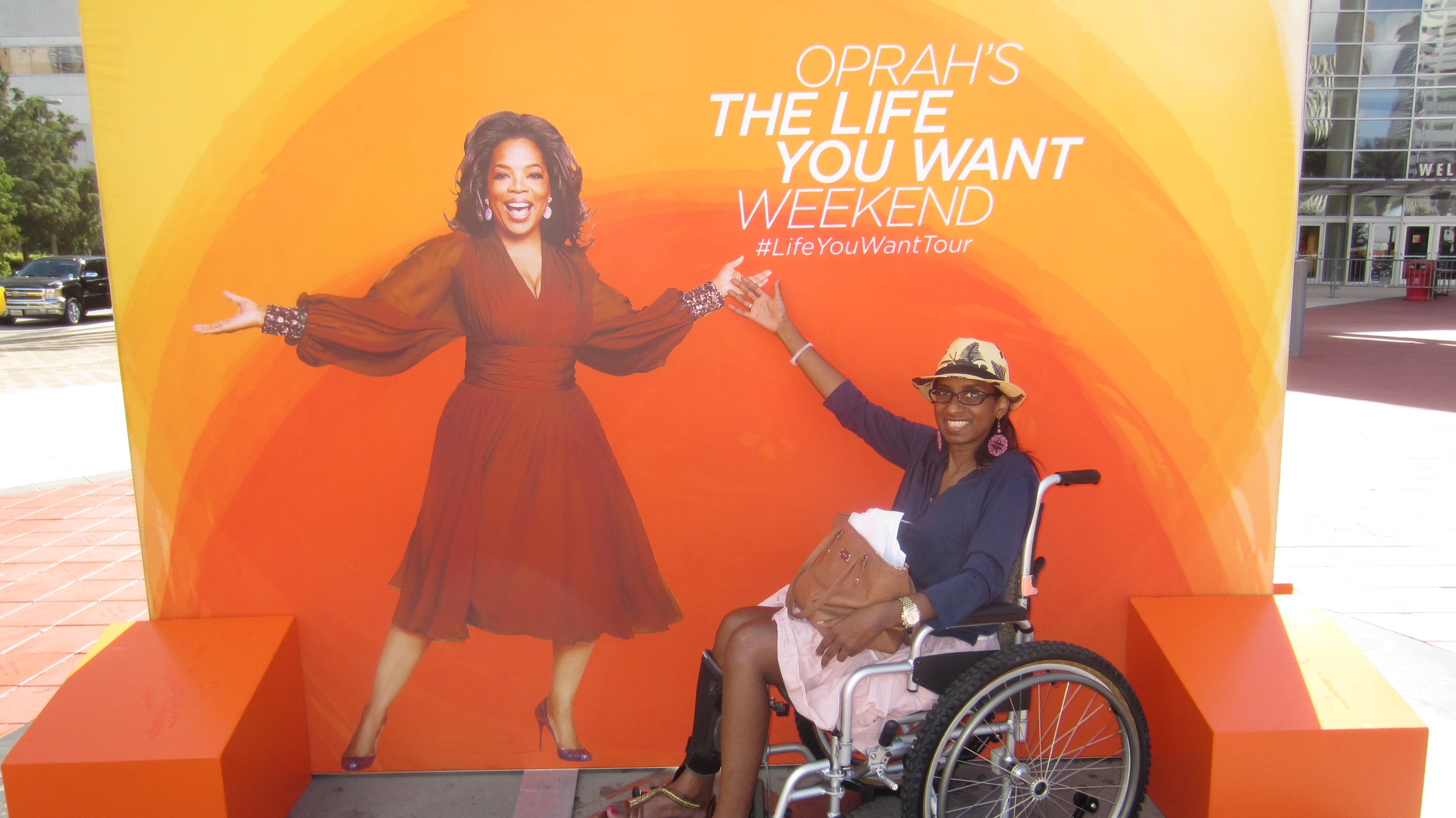 “The more you praise and celebrate your life, the more there is in life to celebrate.” ~ Oprah Winfrey

Who doesn’t love a vacation? I really like being on holiday and this one was going to be great. Why? Because I was going to see Oprah!

My husband, Tommy, wanted everything to be a surprise. He arranged our itinerary, so I only knew some basic details. We were going to Houston for 5 days to attend Oprah Winfrey’s “Life You Want” tour. It is a two-day empowerment gathering, highlighted by motivational and inspirational speakers and exercises. I was so excited because I could always use some extra motivation and inspiration in my life.

We arrived in Houston Thursday afternoon and I felt pretty good, just a little tired from the ride. The event was Friday and Saturday, so I had some time to rest up for the activities. We checked into the hotel, got some food and I went to sleep early.

Friday morning, I felt a little weak but that usually is the case for me most mornings. We got breakfast then walked to the first event. It was taking place outside and the Texas heat began beating me down. I could feel myself getting weaker by the moment. Just when I was about to give up, my first surprise happened. Two of my long time friends showed up. One resides in Houston and the other resides in Dallas. Then I found out it wasn’t a coincidence. They were going to give me a party the next day at my hotel. I couldn’t believe they would do that for me.

After an hour outside with my friends, I told Tommy I wanted to go back to the hotel room and rest up for the night events. I was so happy the next part of the experience would take place inside the Toyota Center Arena. Yes, it would be nice and cool.

On the walk back to the hotel, Tommy told me about my next surprise. He said, “Not only are you going to hear Oprah speak but you are actually going to meet her. “

When he told me, I was almost speechless.

Once we got back to the room, I tried to rest but my mind was racing. After about 3 hours of being in bed and trying to relax, it was time to go. I was still feeling a little woozy after my rest but I was so excited I pushed through it. So off we went to the event. During the walk to the arena I was seeing double. It finally stopped when we got inside and I could feel the cool air on my face. 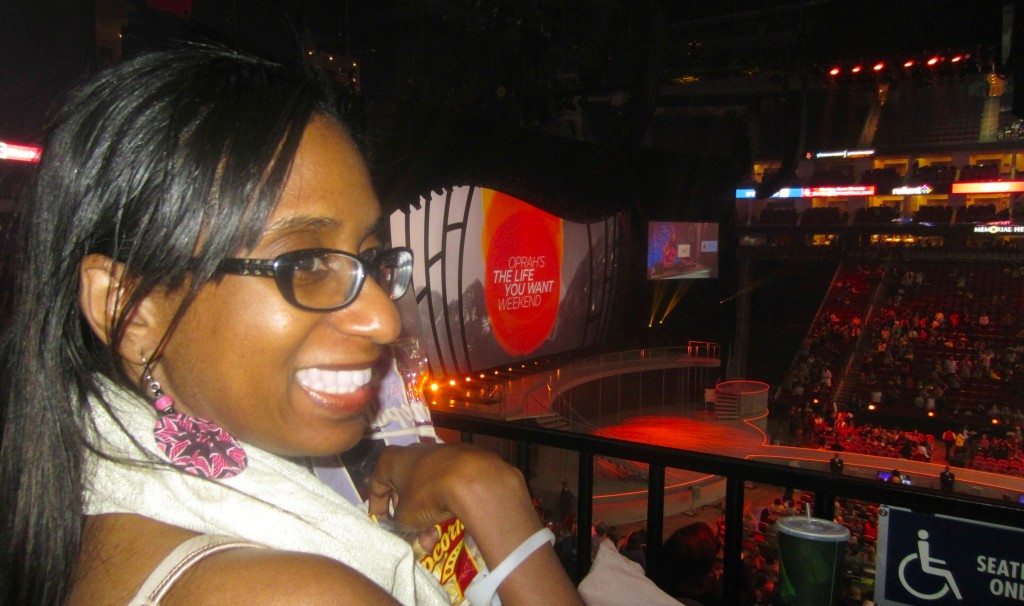 We found our seats fairly quickly and 45 minutes later the event started. Oprah spoke for 2 straight hours and overall it was fantastic. 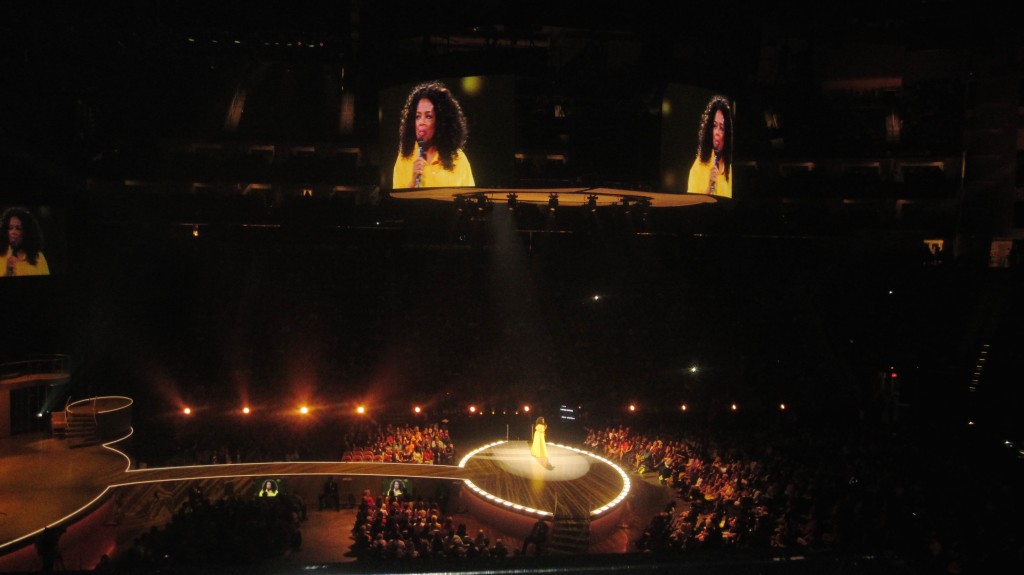 At the end of the presentation, a lady I have never seen before approached me and said, “Mrs. Lemelle please stay in your seat.” Ten minutes later she escorted us through various back doors and elevators leading us into a skybox inside the Toyota Center.

She told us to wait and someone would be with us shortly. Two men in suits, wearing two way radio ear pieces, asked us to empty our pockets and leave my purse, cell phone and camera and we could get everything back after the reception. We were then brought into a room and I looked up and there she was. Oprah!

It was just my husband, a photographer, Oprah and myself in the room. And of course I forgot what I wanted to say to her.

She said, “That’s a tough diagnoses. How long have you had it?”

I replied, “I was diagnosed in 2000 “. She told me she would be portraying Richard Pryor’s grandmother in an upcoming bio picture and gave me some details on how she was thinking of playing the part. She said it called for her to use a lot of cuss words.

The photographer interrupted the conversation to announce he was ready. We all got into place, smiled and he snapped a picture. Oprah said goodbye and we were escorted back into the skybox over looking the arena.

There were about 50 people in the room and Gayle King was greeting everyone. A woman walked up to us and handed me a copy of the picture we took with Oprah. She then told us to stay and enjoy the open bar and food.

Normally I would jump at free drinks and food but at this point I was on my last legs. I asked Tommy if we could leave and I could see the disappointment on his face. I assured him meeting Oprah was great and I just wanted to get back to the room so we could get an early start to day 2. We picked up our personal items on the way out and I was so happy to be heading back to the hotel.

After getting into the room, I took a shower and quickly got into bed. Three hours later I felt terrible. The room was spinning and I was confused. I asked Tommy to help me to the restroom. Then everything went black.

I really don’t recall much else. I just have glance accounts of what happened.

I remember someone shining a light in my eyes and asking me, “What’s your name?” “Where are you at?” “How old are you?”

I could hear them but I couldn’t answer back.

I remember seeing people walking around but my view was very faded. My eyes were going in and out of focus.

That was it. I remember nothing else, until I woke up in an ER room lying in a blood stained bed.